After another strong year for the S&P 500, bargains are harder to come by. However, the backdrop of an improving economy, low interest rates, and reasonable valuations, presents the astute investor with opportunities to generate strong returns.

We believe there is a significant chance of a pullback in the market next year, which would present numerous buying opportunities, particularly with companies who miss earnings due to dollar strength and whose core businesses are performing well.

Therefore it is our opinion that smart stock picking will be even more important in 2015. With continued strength in the US dollar and the significant drop in oil prices, we believe certain sectors will feel the benefits, while others may not. Below we present a few of our top picks for 2015:

• Shares of Facebook have increased 46% in 2014. Since we first recommended FB in our blog on April 21 at $59, Facebook has rallied well and we see continued gains ahead in 2015. Facebook has multiple catalysts for growth in 2015, which we detailed in our post from October 28, “Facebook Heading Higher”.
• A recent article by CNBC shows how Facebook is accelerating its push into video ads in user’s newsfeeds for the holidays by targeting brands ranging from Kate Spade to the United Postal Service. Video ads on Facebook generate higher prices compared to other Facebook ad formats.
• At a recent whiteboard session at its headquarters, Facebook explained to reporters its plan to integrate Atlas, Audience Network and Liverail to deliver people based marketing. This combination offers advertisers the opportunity to target consumers with relevant video ads across desktop, mobile and tablets and to track the effectiveness of those ad campaigns by tracking offline purchases anonymously. Over time, Facebook has the potential to attract a significant slice of the $68 billion television advertising market.
• Facebook’s management indicated on its 3Q2014 earnings call that costs will rise between 50-75% in 2015, which resulted in the stock falling from $80 to its current price of $78.4. The reduced expectations for 2015 represent an opportunity for FB to beat lowered guidance and spark a rally in FB shares in 2015 in our view.

• Speculation of a rumored takeover of Starz has driven recent volatility. The stock fell from $33 to $27.5 following a Bloomberg report that Starz could not find a buyer at it’s rumored asking price of $5 billion (which equates to $48 per share). Chris Albrecht, the CEO of Starz, denied having any knowledge about the rumored takeover speculation in a recent interview with CNBC, but he stated that although the company is not seeking out buyers it would not be opposed to hearing offers to buy the company if it was in the shareholders’ interest.
• At its current price of $29.20, Starz represents a great buying opportunity. STRZA trades at 12.27 times estimated 2015 earnings. If a buyout does not occur, we estimate that Starz could have 20% upside in one year from current levels, which would equate to Starz trading at 14.7 times estimated 2015 earnings. If an offer does materialize, the shares could command a 40-60% premium from current levels.
• Starz A stock has rallied 5.6% since we first recommended the shares at $27.65 on February 6th. With the stock’s current price of $29.20, Starz shareholders may be rewarded again in 2015.
• In 2014, Starz successfully executed its strategy of developing original content with hits such as “Outlander”, “Black Sails”, and “Power”. The success of these shows increases the appeal of Starz to cable providers and to internet streaming providers.
• According to an article in the NY Post, CBS and Lionsgate are in rumored talks to buyout of Starz at a $5 billion valuation. Considering Starz current market cap of $3 billion, this represents 60% upside to the current share price.
• Starz currently trades at valuation of 12.27 times its estimated 2015 earnings. This low valuation represents a margin of safety with downside limited risk.
• With the potential of a 40-60% gain from a takeover, 20% upside without a buyout and limited downside, Starz is one of our top picks for 2015.

• Viacom is one of the cheapest companies in the media industry. The one year forward P/E Ratio is currently 11.25, which is significantly lower than its competitors (Time Warner (TWX), 21st Century Fox (FOXA), and Disney (DIS). 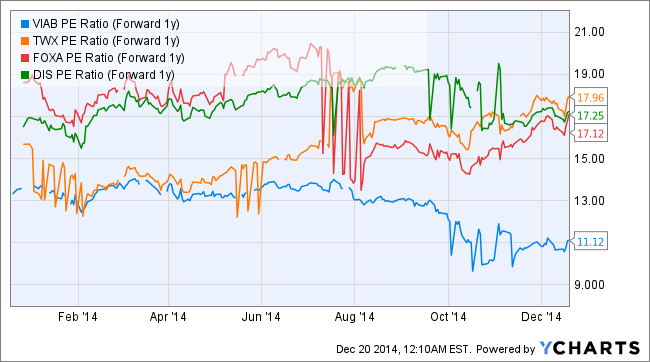 • According to Yahoo Finance, earnings are expected to grow 10.7% this year, followed by 12.9% next year.
• The 10 year average P/E ratio for VIAB is 15 times earnings. Viacom is expected to earn $5.98 in fiscal 2015 which ends in September. The estimated price per share for VIAB is $89.7 by September 2015, which represents upside of 18.2% from Viacom’s current share price of $75.92.
• Viacom has multiple positive factors to drive growth in 2015 including its large stock buyback program, continued growth in affiliate fees, strong film slate at Paramount, and increased revenue from internet streaming providers. We have detailed these in more depth in our blog post on November 13th, “The Case for Viacom”.

Bed Bath and Beyond:

• Bed Bath and Beyond (NASDAQ: BBBY) shares have increased from $64 to $73.55 after we recommended the stock on September 19th. We still see significant gains in 2015 for BBBY.
• Currently BBBY trades at 13.45 times its estimated 2015 earnings. Its average trailing P/E Ratio over the last 10 years is 18.75. If Bed Bath and Beyond trades at 18.75 times earnings on 2015 numbers, the potential upside is 39.4% from current levels.
• According to its 3Q2014 earnings press release, BBBY has $1.8 billion remaining on its current share repurchase program, representing 14% of its shares outstanding.
• Bed Bath and Beyond reported a comparable same store sales increase of 3.4% in its most recent quarter.
• Most of Bed Bath and Beyond’s sales are in the United States, so it has low currency risk from the rising dollar.
• Bed Bath and Beyond is going up against easy comps in 2015. Its next upcoming earnings report on January 8, 2015 is exactly one year to the date since BBBY disappointed investors with a lower than expected comparable same stores sales increase of 1.3% vs. 2.7% analyst expectations. Additionally, Bed Bath and Beyond lowered their earnings forecast in that earnings report due to an increased capital spending forecast on renovating their stores, redesigning its mobile website and apps, and updating its point of sales systems in stores. These costs should moderate substantially in 2015.
• In Bed Bath and Beyond’s fiscal 4Q2014 ending March 1, 2014, BBBY reported a same store sales increase of 1.7%, however severe weather caused store closures which reduced comps by 2.0-2.5% according to management. Barring another abnormally severe winter like last year, BBBY should be able to beat those numbers.
• Bed Bath and Beyond’s low valuation, large stock buyback, healthy operating performance, and easy comps will position the shares to do well in 2015.

Overall, with the S&P 500 trading at over 16 times expected 2015 earnings we see the potential for gains between 7% to 15% in 2015. Which stocks do you have on your top picks list? Let us know in the comments below!

Disclosure: Ideal Asset Management is long shares of FB, STRZA, BBBY, VIAB for its clients
All ideas expressed in this article are the opinions of Ideal Asset Management LLC.
Before trading on any of the advice in this article, consult with your financial advisor to
make sure it suits your financial goals
All investments carry the risk of loss
Past performance is not indicative of future results