The Case for Viacom

Rahul Shah • No Comments on The Case for Viacom •

While shares of Viacom (NYSE: VIAB) are down over 20% year to date, we feel the stock is poised to outperform going forward. The case for investing in Viacom includes its low valuation, large stock buyback program, consistent stream of affiliate fees from cable providers, strong film slate at Paramount Pictures, and increased revenue from licensing content to internet streaming providers.
Below are a few factors we feel will contribute to its performance:

• Low Valuation: Viacom currently trades at a PE ratio of 12.79 (based on trailing twelve month earnings). 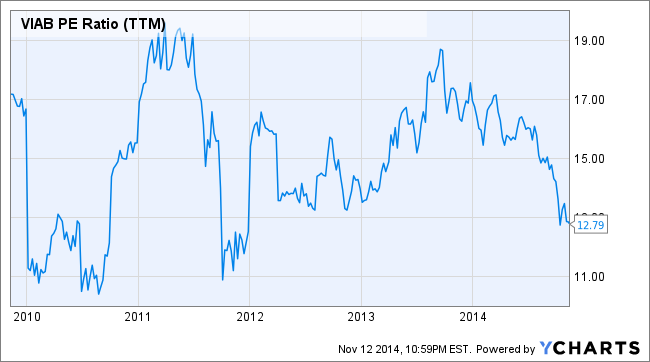 As shown above, Viacom is trading at the lower end of its valuation range over the last 5 years. Recent analysts’ estimates have Viacom earning $6.14 in 2015; considering Viacom’s current share price of $69.25, the PE ratio based on 2015 numbers is 11.28.

• Large Stock Buyback: Viacom has spent $2.55 Billion on purchasing its Class B stock over the 9 month period ending June 30th, 2014. Viacom is averaging a quarterly buyback of $850 million, an annualized rate of $3.4 Billion. Considering Viacom’s current market capitalization of 29.29 Billion, the buyback amounts to 11.60% of the shares outstanding. This large buyback will add significantly to earnings.

• Affiliate Fees: Affiliate fees from cable providers represent a consistent and growing source of revenues for Viacom. In its most recent 10-K filing, Viacom’s affiliate fees increased to $4.245 Billion from $3.889 Billion in 2012. Contracts with cable providers have built in yearly price increases, which are very appealing to shareholders.

• Strong Film Slate at Paramount: Viacom’s Paramount Pictures should benefit from the summer release of “Transformers: Age of Extinction”, which has grossed over $1 billion worldwide. The success of “Transformers” and “Teenage Mutant Ninja Turtles” should help earnings at Viacom’s film segment in its upcoming earnings report. Looking ahead, to 2015, Paramount has a strong slate of potential blockbusters including “SpongeBob: Sponge Out of Water”, “Terminator: Genisys”, and “Mission Impossible 5”.

• Increased Revenue from Licensing Content to Internet Streaming Providers: Viacom has capitalized on distribution deals with internet streaming providers in recent months with Sony and Hulu. These deals are very lucrative for Viacom, as they are generating revenues from older shows for which they have already incurred expenses. These deals are high margin and should help add to earnings growth in the future.

In addition, the estimated 5-year earnings growth rate for Viacom is 11.9%. Given the average analyst EPS estimate of $5.37 for 2014, we estimate EPS (assuming 11.9% annual growth) for Viacom in 2019 to be $12.81. Applying a PE ratio of 15 to this number results in an estimated share price of $192.15 by September 2019. On a short term basis, applying a PE ratio of 15 to Viacom’s estimated EPS in 2015 of $6.14 results in an estimated 1 year share price of $92.1. This represents upside from the current VIAB share price of $69.25 of 33.2%. Since VIAB is trading at the low end of its valuation range, the risk/reward ratio is very appealing at current levels. All these factors combined, the long-term outlook for Viacom is very promising.

Disclosure: Ideal Asset Management is long shares of VIAB for its clients
All ideas expressed in this article are the opinions of Ideal Asset Management LLC.
Before trading on any of the advice in this article, consult with your financial advisor to
make sure it suits your financial goals
All investments carry the risk of loss
Past performance is not indicative of future results