Bed Bath and Beyond Stock: Buy While Within Reach

Rahul Shah • No Comments on Bed Bath and Beyond Stock: Buy While Within Reach •

Flying JetBlue has been a great source of excitement. Yes, Terra Blue potato chips are delicious. Also, purchasing a sleeping kit was a luxury my wife and I gave ourselves every time we flew. Obviously, we wanted to be comfortable in our seats; but also, my wife was happy to get a Bed Bath and Beyond coupon as a bonus. She loves the Bed, Bath & Beyond coupons. It gave her an excuse to go shopping there. From then on, she has been on hunt for BBBY’s coupons. Now, she’s looking for any excuse to shop there, with or without coupons.

Bed Bath & Beyond (hereafter BBBY) has amassed a loyal customer base, including my wife, since its inception in 1971. Its footprint has grown to over 1400 stores blanketing the United States and parts of Canada. BBBY has a proven record of consistent earnings growth as shown on the chart below. 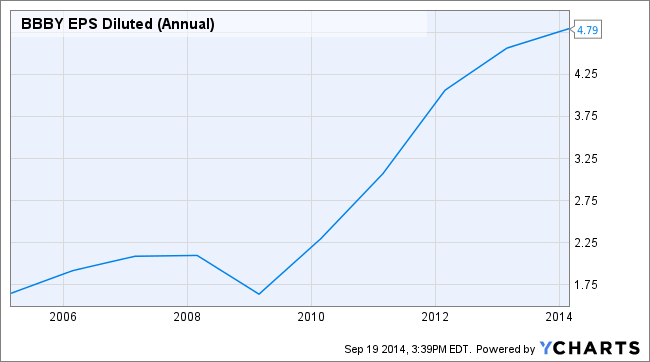 BBBY increased its earnings per share from $1.65 in 2005 to $4.79 in 2014. There was only slight drop in its earnings that occurred during the 2009 financial crisis. And even during this tumultuous period, BBBY delivered positive earnings; a testament to its resilient business model.

The Price to Earnings multiple of BBBY over the past 10 years is show below: 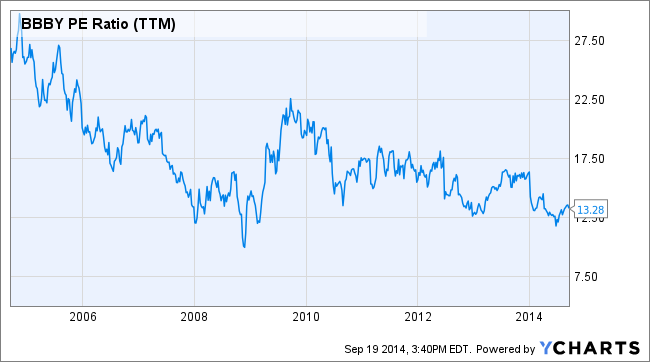 BBBY has underperformed because the company announced larger than expected capital expenditures to improve their stores for 2014. These improvements will add additional expenses in the short term and negatively affect its 2014-2015 earnings. The improvements include redesigning their website and mobile apps, updating its stores’ point of sales systems, and increasing its ship from store capabilities. Earnings estimates have already been reduced to reflect these improvement costs, and BBBY will likely reap the rewards of these investments in future years. These investments will likely taper off from 2015 and beyond. Even with its relative underperformance during this time, BBBY has posted positive same store sales growth – an indication of a healthy business. The current stock price represents a great buying opportunity.

BBBY has an enormous Free Cash Flow Yield as shown on the following graph: 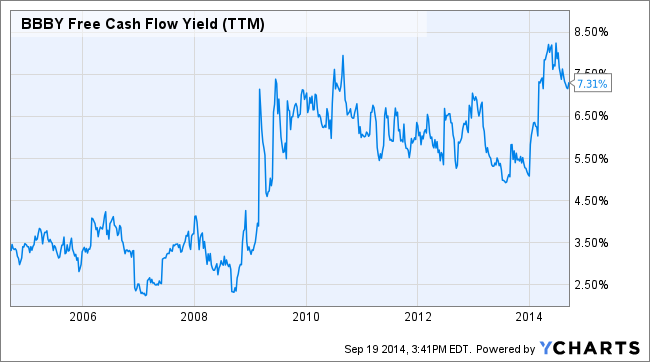 BBBY’s current free cash flow yield is 7.31%, nearing its highest level in the past 10 years.

Management has announced a new $2 Billion buyback as well as an accelerated $1.1 Billion buyback totaling $3.1 billion – 25% of BBBY’s outstanding shares; this ensures that BBBY will increase earnings substantially in the near future.

The improving job market, 1.723 million jobs added from January to August of this year, and housing market, with existing home sales rising 2.6% in June and home construction rose 22% from January to July of this year, should provide a macroeconomic tailwind, which will help Bed Bath and Beyond grow earnings as well.

In addition to attaining a loyal following, Bed Bath and Beyond is a well-run business that has been generating consistent earnings growth for several years. The company is also making wise investments that are likely generate more earnings in future. Bed, Bath and Beyond is great buy; my wife agrees.